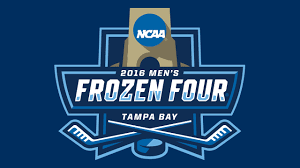 This April marked the biggest event in college hockey: The Frozen Four. Similar to NCAA’s The Final Four in college basketball, The Frozen Four is a competition between four of the best hockey teams in the nation. This year, the competition featured a few familiar names, as well as a new one. In the semi-finals, Boston College and Quinnipiac University took to the ice at Amalie Arena in Tampa, Florida for a spot in the final round. Although Boston College put up a good fight, the match was decided with a 3-2 loss to Quinnipiac University, sending Quinnipiac to the final in the hunt for the National Championship. The other semi-final game included the University of North Dakota, where current Blackhawks captain, Jonathan Toews, attended and played for from 2005 to 2007, and the University of Denver, both of which ranked high in a USA hockey poll for the top hockey program at the collegiate level. This particular game was also close, until North Dakota sophomore and Blackhawks draftee, Nick Schmaltz, scored to put the UND Fighting Hawks in the lead, propelling them into the final round. On Saturday, April 9th, Quinnipiac University took on the University of North Dakota. Fans from both schools were present in Tampa, Florida to cheer on their respective teams. Quinnipiac was looking for their first ever National Championship victory, while North Dakota was on the prowl for their eighth. Despite Quinnipiac’s valiant effort, the North Dakota Fighting Hawks defeated their rivals in a crushing 5-1 battle, claiming their eighth National Championship in program history. The team as well as its students are spending the rest of their year celebrating their incredible achievement, and making their alumni such as Toews #UNDProud.