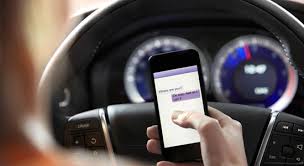 ‘Hey, waz up?’, ‘On my way’, ‘K, CU Soon!’ I’m sure many of you have texted these phrases before, either to your friends, parents, or family. We, as teenagers, seem to be permanently glued to our cell phones, especially when it comes to texting. The ultimate challenge for teens now-a-days is without question texting and driving. According to textinganddrivingsafely.com, 34% of teens admit to texting and driving, and that is only the percentage that confirmed it. Lincoln-Way newspaper took the challenge of asking the students about where their cell phones are when their key is in the ignition.

Central students who took the time to visit the school newspaper’s website had the opportunity to participate in the texting and driving poll. The options were: I text while I’m driving; I only text when I’m at a stop light; or I never text and drive. Our student body voted, and the results were revealed: 33% said they never text and drive, 46% say they only text at stoplights, and 21% say that they do actually text and drive. The results are varied, but they show most of the student body only texts when at stoplights. Is this a better alternative to actually texting and driving though? Some may think so. It doesn’t do harm when you are not moving, right? Well, not necessarily. Half the time people won’t even notice when the light changes, which can result in some angry drivers behind you. Not paying attention for even one second could be the result of a rear end crash. Any delay, whether it’s while you’re moving or not, could turn into something deadly. And the reality of it is, if people text at stoplights, it could possibly lead to them texting while they are actually driving. On most occasions, one thing can lead to another. A driver starts feeling safe while texting at stop lights, so they take the step to text while moving. Drivers, especially our age, don’t understand the dangers of texting while driving, or they just think it won’t happen to them.

Texting while driving is a major issue in our country. Drivers starting at a younger age are hypnotized by devices. Even when we think it is safe, it can be dangerous. Now cell phones and cars are teaming up to keep driving safer. There is word that a new technology is being made to make sure people, not just teens, keep off their phone when driving. In some newer car models, cell phones can be put on settings of ‘Do not disturb’ from the car’s home screen. There is even work being done towards a phone that, when someone texts you while you are driving, automatically sends a text message by itself saying you are driving to that person. With all these new technologies on the rise, texting and driving could be changed dramatically. As we all know, multitasking does not go well with driving. Whatever anyone has to say to you can wait, your life is more important.