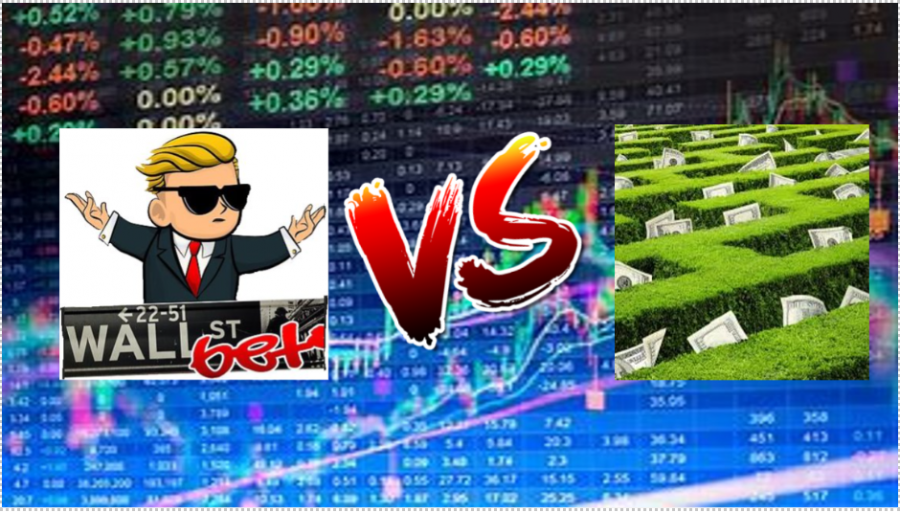 You may have heard on the news recently about a kerfuffle going on between “hedge funds” and something called “Wall Street Bets”, or a “short squeeze” caused by “market manipulation”. But what does it all mean?

Wallstreetbets [sic] is a subreddit, or sub-community of the popular forum-based website Reddit, based around making stock and options discussions among its members. Most discussion centers around non-traditional investment strategies and “day trading”, which is buying and selling a stock within the same day. It is self-described by the tagline “Like 4chan found a Bloomberg terminal” and has over 9 million members at time of writing. Recently, there has been a series of posts by one user inspiring interest in the GameStop stock, by telling his accounts of his “YOLO investment”, where he poured thousands of dollars into the stock.

The opposing side in this story is the hedge fund named “Melvin Capital” (A hedge fund is an investment fund of pooled money from many wealthy investors or corporations). This fund had been shorting, or buying shares that don’t actually exist, the GameStop stock to its own gain for awhile, recording profits in the millions from the process.

How do these tie together?

Well, when the posts by earlier said user of Wallstreetbets gained traction, a feedback loop was created of investment, popularity growth, and price increase. These posts caused a rise from baseline price of ~$20 per share on January 11th up to a meteoric high of $483 a share on January 28th, an increase of 2,315% in a matter of a few weeks. This caused a massive loss of income for the hedge fund Melvin, because of how shorting a stock works. When someone buys stock in a company, what happens is they’re buying a small ownership in the company: if a company has 100 shares of stock, then each share represents 1% ownership in a company. Because there are limited amounts of shares, if someone wants to buy more when all shares are owned, what that person can do is “borrow” a share that does not exist, sell it, and then buy it back later at a lower price, for a net profit. The hedge fund Melvin Capital had been doing this process on the GameStop stock for awhile, and when the Wallstreetbets surge occurred, they were forced to buy back hundreds of millions of dollars of shares at a much higher price than sold.

As you might imagine, this sort of massive loss of money might peeve some elites and corporations, so there were quick repercussions. The moderators of the WSB subreddit released a statement claiming that they did not coordinate or condone a manipulation of the market (in which a group of people collectively agree to buy or sell stocks to illegally change the price) and claimed that the deluge of new users was the cause. The popular stock trading service Robinhood barred trade of GameStop and other “meme stocks” like AMC and Blackberry on January 28th, with many class-action lawsuits subsequently filed against the service. Additionally, the WSB Discord server was banned, for “racism and hate speech”, which may be true, but many also speculate that it was banned for the massive losses it caused to various corporations. Congress even got involved, setting up a hearing to determine Robinhood’s role in manipulating the market by barring trade.

After the high, however, must come the low. Once February hit, the stock dropped from $300 on January 29th to $225 on February 1st, then again to $100 on February 2nd, before settling in the $50 range by February 5th. Many people from Wallstreetbets have lost significant amounts of money, in the thousands or tens of thousands of dollars, or have since held on to their significantly devalued shares, at the advice of billionaire investors like Mark Cuban and Elon Musk. This advice seems to have been solid, as a secondary squeeze has occurred on February 24th, bringing the stock up to $100 for a short time. This secondary push is still developing at time of writing, so it remains to be seen what becomes of this. Nonetheless, it has been interesting to see an “everyman’s version” of the massive gains and losses that occurred in the 2008 housing bubble, and what happens to those involved.