Pandemic and the Play 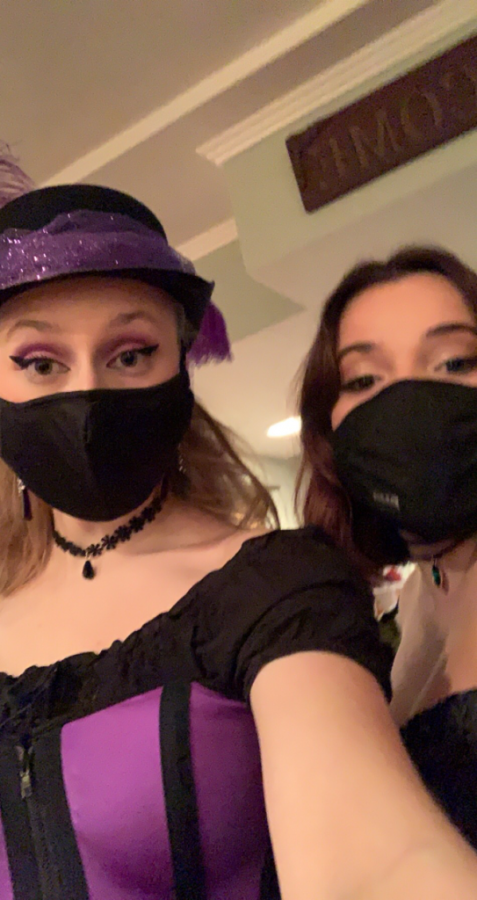 Elizabeth De Young and Olivia Freiberg dressed to perform - masks and all!

Acting has always held a place very close to my heart for a long time now, I’ve always found comfort in plays. But, because of the pandemic, I’ve been severely lacking in theatrical entertainment. Thankfully, Lincoln-Way has quenched my thirst for drama by providing us with a fall play- but not in a way that you would expect.

I had the pleasure of speaking to Elizabeth De Young, one of my closest friends, and one of the actors in the play!

What is this year’s Fall Play called? What is it about?

The play was called Spoon River Anthologies and was based on a book of poems published in 1915. Each poem is the story of a person who had lived in the town Spoon River and is now telling the story of their life and in some cases, their death.

I had two characters in the show, they were named Mrs. Kessler and Nellie Clark. Mrs. Kessler was a middle-aged lady who worked to provide for her family, due to her husband’s laziness. She made money by washing and repairing the clothes of everyone in the town, and by doing this she learned many secrets about their lives. But washing and sewing day in and day out makes her resentful of it, and she doesn’t hide this fact. Overall, for her time, Mrs. Kessler is a very independent woman who knows how to keep a secret.

Nellie Clark is a young lady, probably in her early 20s, who at 8 years old was raped. The whole town found out and shamed her for it, thinking it to be her fault. Eventually, she finds a small piece of happiness when a man from another town marries her. After two years he finds out about her past, and casts her out, thinking he was cheated on because she wasn’t a virgin. She ends up dying soon after. Her story in my opinion was one of the most heartbreaking.

Who was your favorite character in the play? (It can be yours, or one of your peers!)

My favorite character of the show was probably Judge Selah Lively played by Brian Cummins. His physicality and accent that he used for this character brought it to life and made this monologue so funny.

How was this experience different than other performances you’ve been in? Was everyone happy to be there?

This play was a lot different than any I’ve been in because usually, you’re very focused on building connections with other characters, but here it’s just you. You had to become your character during that monologue and relive what they went through to across the emotion and their whole story. It was also very different to be outside and not in the theater, but for this show, I think it was an amazing choice.

I think that everyone was happy to be a part of it, it was a sense of normalcy. Not everyone can do what they love right now because of Covid, but we got lucky and inventive and were able to put on a great show.

I think it’s cool that the play will be on YouTube because now everyone can see it. A lot of people have distant relatives that they only see every few years and this is a great opportunity for them to finally be able to seem then act. Although it doesn’t sell tickets, I think it’s good to do something different.

Do you want to continue to do these plays like this format during the pandemic?

I would love to do anything we’re able to do during the pandemic. If this is the style that’s necessary to keep production running, then I’m all for it. The biggest thing is just being able to pursue something you love even when the world is a little crazy.

Even though the play has yet to be released to YouTube, I am very excitedly counting down the days until they release the video! It will be premiering on YouTube soon.