During the month of October students and other members of the community wear some of their most vibrant shades of pink in order to show their support for breast cancer. In 2019, an estimated 268,600 new cases of breast cancer were diagnosed, and one in eight women will contract some form of breast cancer in their lifetime. With breast cancer being one of the most prevalent types of cancer (especially in women), it is important for us to spread awareness and support those that have been affected or diagnosed with the disease – not only in the month of October, but always.

While not everyone has time to go to a breast cancer walk or event, or the money to donate to an organization, there are many other simple things that you can do to show your support and awareness for breast cancer. One of the most common ways to do this is simply wearing the color pink, which is the color of the ribbon that represents breast cancer. Sports teams around the world choose to use pink equipment, such as pink bats and uniforms for baseball, pink sticks and pucks for hockey, and pink helmets or armbands for football. Another way to learn more about breast cancer and show support is by simply talking to a relative, friend, or family member that has been diagnosed with breast cancer at some point in their life or had their life affected by someone else who has been diagnosed with breast cancer. I chose to do just that, and spoke to my mother who was diagnosed with stage 3c breast cancer in 2009. I asked her, ”If there is one thing that you would want others to know about breast cancer, what would it be?” She responded that it is important to support those who are diagnosed and surround them with love as much as possible, and if you are the individual diagnosed with breast cancer, to know that the cancer does not define you and to try and live your life just as you had before the diagnosis. In honor of this sentiment, show your support of breast cancer by wearing a piece of pink clothing, or reaching out to an individual whose life has been impacted by breast cancer and its effects 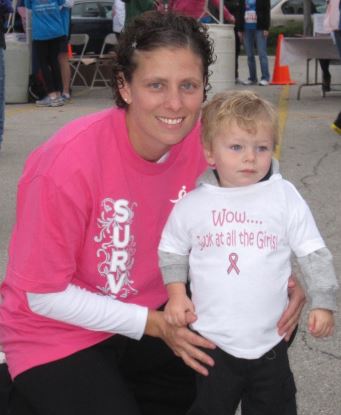