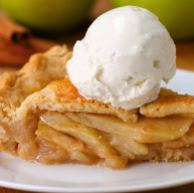 During the holidays, there is no dessert more anticipated than pie. It’s a staple in most American households on holidays such as Thanksgiving and Christmas. There are plenty kinds of pie, ranging from fruit to meat, but which pie is the best? I asked several people to give me their opinion on pie and which their favorite was, and I got three main results.

Surprisingly, many people don’t enjoy eating pie. In fact, several people prefer cake or meat pies. One person said, “chicken pot pie, because sweet pies are too sugary.” Another said, “cake is better because pie tastes gross.” Personally, I agree that cake is better than pie. No one mentioned any kind of berry pie. One person said they, “didn’t like pie or cake.”

Several people said that pumpkin pie was their favorite kind of pie. It’s a Thanksgiving staple, and sometimes a Christmas one as well. When asked, someone said, “it reminds me of the holidays.” Someone else said, “it tastes best with whipped cream.” After the interviews, I can conclude that most people enjoy this pie because of its connection to the holidays, but it is not anyone’s favorite because of taste.

I got overwhelming votes for apple pie. It’s everyone’s favorite, whether it be for personal reasons or because of taste. Several people said things along the lines of, “my grandma makes the best apple pie” or “the apple pie my grandma makes tastes amazing.” Grandmas seem to make the best apple pie. Also, most people prefer to eat apple pie with vanilla ice cream. An interviewee said, “apple pie with ice cream is the best dessert.” Another said, “apple pie tastes best with vanilla ice cream.” Because of this and many other reasons, apple pie trumps all others.