Strike the harp and join the chorus 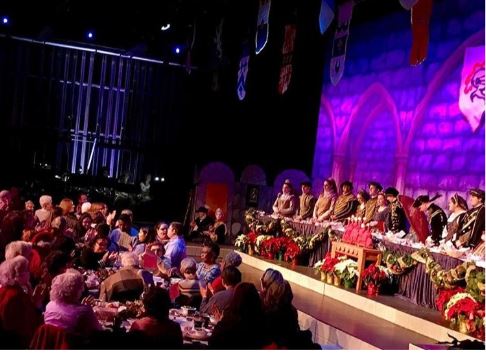 One of the oldest traditions in the Lincoln-Way school district is the annual Madrigal Dinners. In fact, this year marks the 50th anniversary of the first Madrigal Dinner at the original Lincoln-Way High School. Madrigals is an interactive show put on by Lincoln-Way students (done at each of the three schools) where attendees are thrown back in time to a medieval Christmas celebration. The stage in the auditorium is transformed into a royal castle where people enjoy an evening of food, singing, and laughter. Students play the part of a royal court:  the king, queen, and even the jester, sing, or play an instrument. Every year, students audition to make one of three singing groups, the cast of characters in the castle, or play in the Madrigal brass or flute groups. Together, these students put on several performances that are a special part of their holiday season. “We look forward to it every year,” says junior Savannah Novotony, “At the end we all light candles, stand together, and sing ‘Silent Night’. It’s really pretty and means a lot to us.”