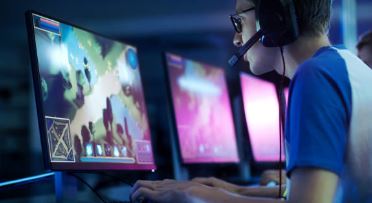 Let’s talk about video games. Ever since they were first invented, they have been firmly established in entertainment culture. Although most can agree that there is no getting rid of video games, people have mixed feelings about them.

Let’s start with the pros of video games. Video games are as much of an art form as books or movies. They tell stories in an engaging way by making the player a part of them, or even letting the player create the story. Let’s take a game like Minecraft, a game with endless possibilities. You can build whatever you want, go on endless adventures, or yell at water sheep. They encourage creativity, and serve as a light-hearted form of entertainment. I talked with student Samuel Cross for his thoughts on video games, and he claimed, “Well, some kid’s friends could be busy and they have nothing else to do, so then we have video games, and it doesn’t have a bad effect on them.”

But as with everything good, there comes the bad. Video games can be distracting. Games like Fortnite and Minecraft can seem addictive, releasing dopamine into the brain with each time the console turns on. Students who play too many video games may find less time for homework, or play mobile games during school.

Personally, I think video games are fine in their own right, but like anything else, you need to consume them in moderation. I play games like Minecraft and Black Ops, but I try to keep it to a minimum. You can’t eat 7 bags of SunChips, you can’t sprint for 10 hours straight, and playing games till 3 am isn’t very healthy. That being said, they have become such a massive part of our culture that we should be careful of their downfalls, while also celebrating their more positive qualities.